The Best Day Trips from Tavira


Tavira is the perfect base to explore eastern Algarve and the islands of the Ria Formosa Natural Park. Its location by the Spanish border means that, planned well, a day trip to the great historic city of Seville is also possible. Below are the most recommended destinations for day trips if you’re staying in Tavira for a few days. 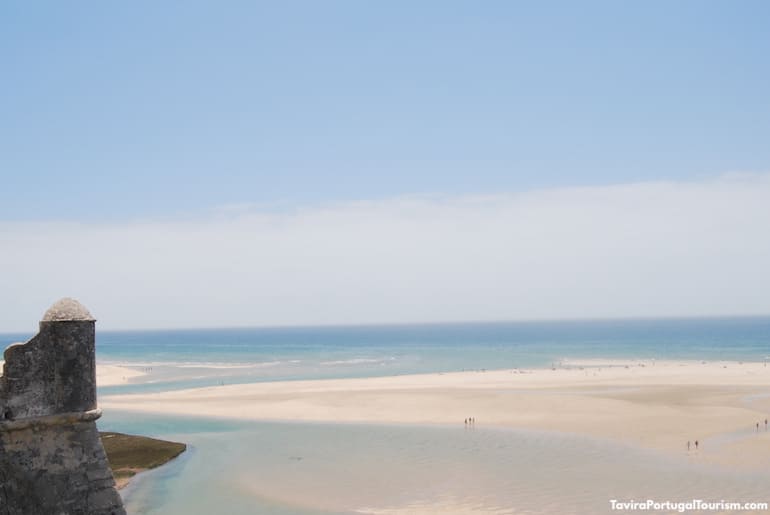 This tiny village stands above the Ria Formosa Natural Park. It’s a very picturesque and scenic place, offering a panoramic view over the lagoons and the beach. It has just one small church, an 18th-century fortress and little over a dozen houses. It’s located immediately to the east of Tavira, and its beach is very similar to those by Tavira, but even quieter. If you make just one day trip, make it Cacela Velha. Bus 67, operated by Vamus, which links the cities of Faro and Vila Real de Santo António, stops at the bus station in Tavira and reaches Cacela Velha in just 15 minutes from there, stopping on a road where you see a sign pointing to the village. It’s then a 15-minute walk straight ahead, down the road. If you’re driving, the journey takes 15 minutes, following road N125. When you arrive, you may park in the parking lot that’s as big as the village itself.
See the complete Cacela Velha tourism guide. 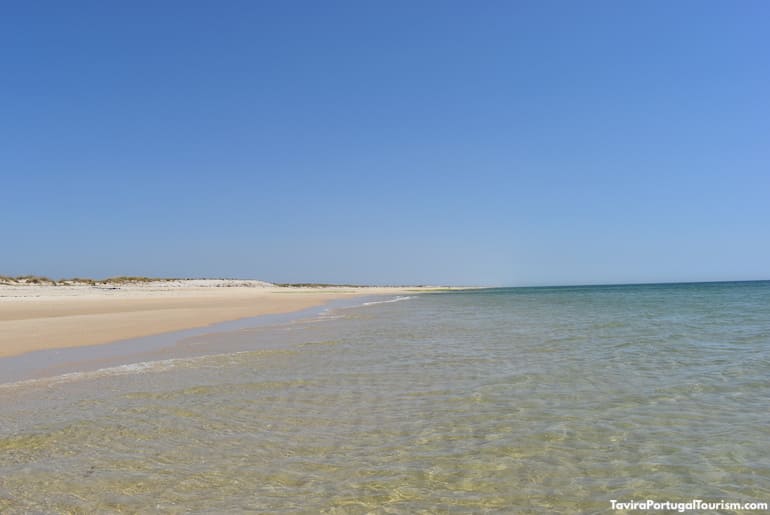 Olhão is the first major town to the west of Tavira. It’s one of the busiest fishing ports in southern Portugal and is visited for its very famous fish market and its beaches. Those beaches are on islands of the Ria Formosa Natural Park, and although more popular than those by Tavira, can also provide plenty of peace and seclusion. This isn’t a historic town, it grew as a fishing community in the 20th century, so there are no major monuments to visit. It’s a place to enjoy the freshest fish you can find and to explore the islands. There are ferries to different beaches, but the most recommended is Armona. The pier is right in the center of town, close to the market. Olhão is less than 30 minutes by car from Tavira. You can also get there by train, which takes about 25 minutes, departing a dozen times a day.
See the complete Olhão tourism guide. 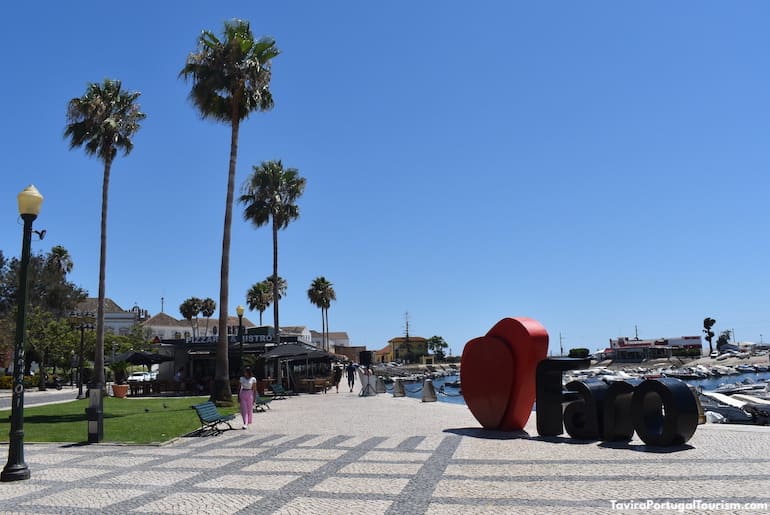 35 minutes by car or train

The capital of Algarve can be reached in about 35 minutes by train from Tavira. There are a dozen departures per day, from early in the morning until the evening. If you’re driving, you take the same amount of time as the train, following highway A22. Often overlooked, Faro is very much worth a visit. It has a very charming walled Old Town and a number of interesting monuments, including the Algarve’s main cathedral, a fascinating museum largely focusing on the region’s Roman past, and a chapel covered with human bones. In the summer, however, you’ll probably prefer the beach. Here too, there is access to islands in the Ria Formosa Natural Park, and the one you shouldn’t miss is Ilha Deserta, which is literally a desert island.
See the complete Faro tourism guide. 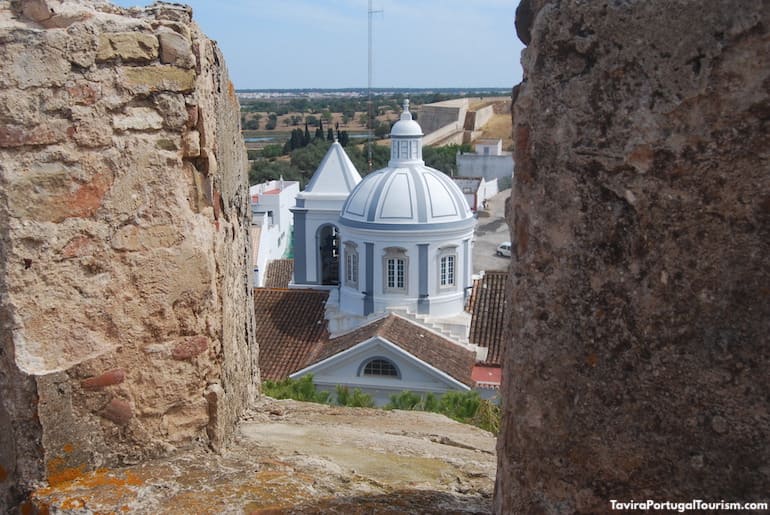 For a break from the beach, head up to this historic town by the Spanish border. It has one of Algarve’s best-preserved castles, originally built by the Moors and altered in the 14th century to protect the region from invaders from across the border. This is quite a sleepy town, and can be seen in less than a couple of hours, but worth a visit if you enjoy history and ancient sights. By car, you’re there in 25 minutes from Tavira, taking highway A22. There is no public transportation between the two towns.
See the complete Castro Marim tourism guide. 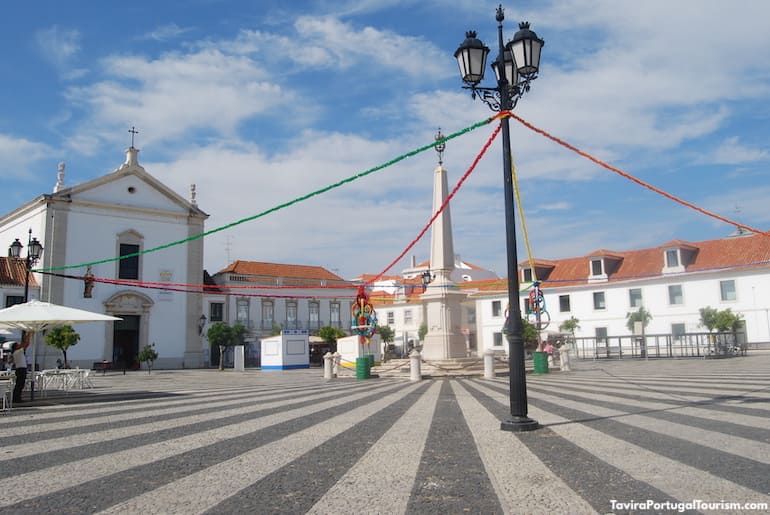 The Guadiana River separates this city from Spain. You can see the Spanish town of Ayamonte across the river, and due to the open borders, you’ll hear as much Spanish as Portuguese on the streets. These streets were laid out in a grid in the late 1700s, after the 1755 earthquake devastated the town along with much of southern Portugal. It was rebuilt by the Marquis of Pombal, who was also responsible for the rebuilding of Lisbon. If you visited the capital, you’ll notice this city’s resemblance to Lisbon’s Baixa district. It has no monuments to see, but it’s a pleasant riverside city with a large square and pedestrianized streets where you can relax eating and drinking in the sun or shop for Algarve souvenirs. There are about a dozen trains per day from Tavira, reaching Vila Real de Santo António in less than 30 minutes. By car, you’re there in 25 minutes, by road N125 or the A22.
See the complete Vila Real de Santo António tourism guide. 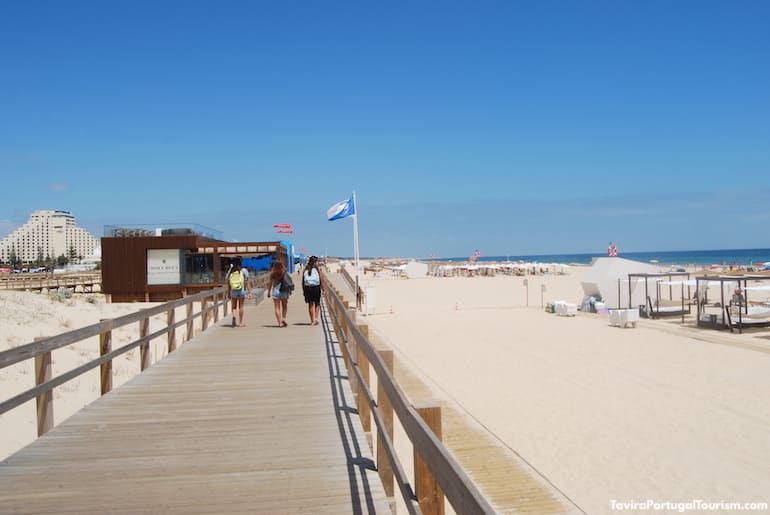 Monte Gordo is a modern resort town between Tavira and Vila Real de Santo António. It’s mostly visited by the Portuguese middle class and Spanish tourists, and is one of the more affordable beach destinations in Algarve. It grew in the 1980s, and although it lacks charm or historic attractions, it has a huge beach and a casino. If, after the quieter beaches of Tavira, you’re looking for a livelier beach, this is the place. A dozen trains link Tavira to Monte Gordo every day, taking about 25 minutes. By car it’s a couple of minutes less, following road N125.
See the complete Monte Gordo tourism guide. 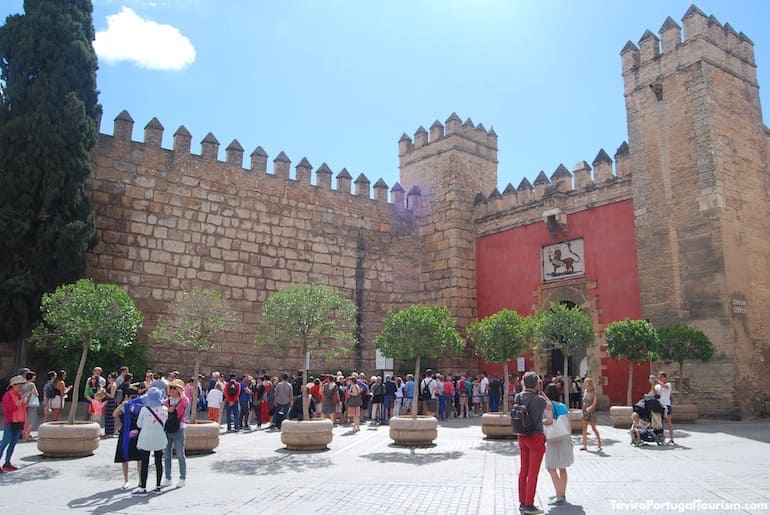 There’s a bus from Tavira to Seville, but it arrives in the afternoon, so for a day trip you need to go by car (there are no trains between the two destinations). From Tavira, take highway A22 to the Spanish border, which is just 25 minutes away. When you cross the bridge to Spain, you’re on highway A-49, which goes to Seville. The total journey takes 1 hour and 45 minutes. If you depart early in the morning, you have several hours to visit the Spanish city’s main attractions, which are the cathedral, the Alcázar, and Plaza de España, before returning to Tavira in the evening.
Know more about the bus to Seville.