Home > Transportation > From the Airport

How to Go from Faro Airport to Tavira

Taking the bus, train, taxi, Uber, or a private transfer from Faro Airport to Tavira or renting a car


The airport closest to Tavira is Faro International Airport (FAO), which is 40km (25 miles) to the west. For most tourists, that’s the point of entry to Algarve, and those staying in Tavira can then rent a car, take public transportation or book a transfer to their hotel. It should be noted that there’s no evening bus and the last train is at around 10pm. If you’re landing in Faro at night, you need to use a private transfer, a taxi or Uber, or you might want to stay overnight and enjoy a day in Faro before heading to Tavira. 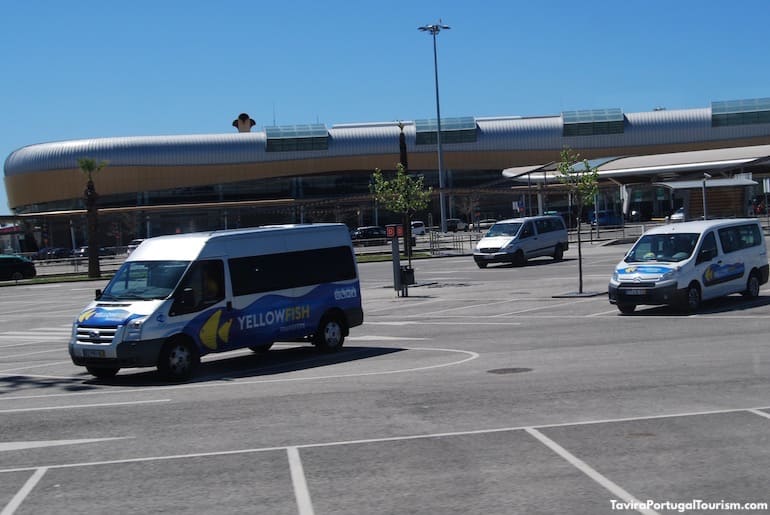 The quickest and most convenient way to get to Tavira from Faro Airport is taking a pre-booked transfer. The driver waits at the arrivals hall, and you go straight to your hotel. These are your options:

- Airport Transfer from Faro to Tavira

- Private Transfer from Faro Airport to Tavira (5 to 8 people)

Bus from Faro to Tavira

There are no buses departing from Faro Airport to destinations in eastern Algarve (they head west, to the cities of Albufeira, Lagoa, Portimão and Lagos). However, the airport’s relatively central location means that you can quickly get to Faro’s bus station and catch the bus to Tavira from there. From the airport to the bus station you can take a taxi, an Uber, or the local bus. That bus is number 14 or 16 of the “Próximo” network, that stops outside the arrivals hall once or twice per hour, depending on the time of day. It terminates at the bus station in about 20 to 30 minutes. It’s in service as early as around 5am and as late as around midnight. The ticket is bought from the driver (try to pay with coins, as the driver often doesn’t have change for large bills). A taxi or Uber takes about 15 minutes and should cost 10 to 15 euros.

Once at the station, head to the ticket office and buy your tickets for the bus to Tavira. That’s bus number 67, operated by the Vamus company. It normally departs 5 times a day on weekdays and only 4 times on weekends (there may be more departures in the summer). The journey takes one hour. After purchasing your ticket, confirm the bus bay, as some buses depart from inside the station and others from the street. Also note that the final destination for this service is the city of Vila Real de Santo António, so that’s what you’ll see displayed on the bus. The bus station in Tavira is very central, about a 5-minute walk from the main square and within walking distance of most hotels.

Train from Faro to Tavira

There are no trains at Faro Airport, but there’s a train station in the center of Faro, down the street (a 5-minute walk) from the bus station. To get there (by bus, taxi or Uber), follow the instructions above. There are about a dozen trains from Faro to Tavira throughout the day, taking less than 40 minutes. Tickets are €3.25 and are bought at the station, not onboard. This is a slow regional train, making several stops before stopping in Tavira. There are no assigned seats, so you may sit anywhere. The train station in Tavira is within walking distance of the Old Town and most hotels.

Taxi or Uber from Faro Airport to Tavira

There are taxis lined up outside the arrivals hall of the airport, but the trip to Tavira can be expensive. It can cost around 60 to 70 euros, depending on traffic, day, and time of day (it’s more expensive at night and on weekends). Uber operates in Algarve and the trip from Faro Airport to Tavira can cost less than 40 euros. Note, however, that higher demand in the summer may increase this fare. The taxi or Uber journey to Tavira takes about 40 minutes.

Faro Airport to Tavira by Car

Follow the signs at the arrivals hall, and you find the offices of different car rental companies right outside the airport. From there, you can easily get to highway A22, which connects the major towns in Algarve. It takes you to Tavira in just over 30 minutes but does have tolls. Alternatively, take the free N125, but this road goes through the center of different towns and there can be traffic, so the journey is longer, taking closer to 45 minutes or more.